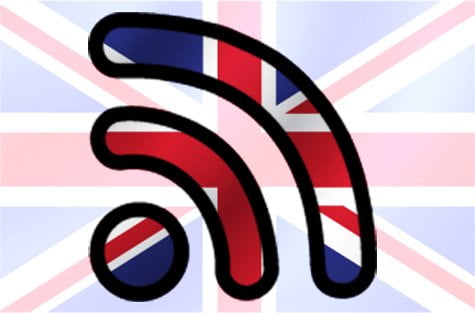 Did you know that WiFi in the UK is different from that in other countries?

As far as usage goes once you’re connected, you’d hardly notice the difference from one country to another but there’s one really important issue that affects us alone in the UK and that issue is really not that well known about or documented.

OK, so without getting too technical, the first thing to understand is that when your device connects to a WiFi network – whether it be PC, Mac, Phone, TV, Smart Player, Camera, Heating Hub or any other one of countless possibilities – no matter what the device, they all do some important technical negotiation stuff in the background in order to agree on how to talk to each other clearly and securely, following the laws and allocated radio frequencies of that country.

And for the most part, that’s the great thing about WiFi (and networking in general), you don’t usually need to worry about the technicalities, you pop in the password, they connect and you’ve got access to the network, the Internet and various other services.

However, part of that technical stuff includes agreeing on what country you’re in so that your device connects to your WiFi access point/router using the correct country’s standards.  This is all automatic, so you don’t normally see it, but trust me, with every connection both your device and the thing it’s connecting to agree on the country using a two-character country code, which should be “GB” for devices over here in Blighty.

And this is where things can start to go a little bit squiffy because some manufacturers have taken shortcuts when it comes to setting up their devices’ WiFi configuration.  For one reason or another, they’ve decided to use “DE” (for Germany) as the country code even though the device is located in the UK.

Now for some usage this is still OK, your device’s WiFi network card will talk to your router, your router will say that the country code is DE and your WiFi device will change over to use the German standards and connect quite happily.

Where this falls apart is if your device looks at, or wants to connect to another network after its connected to this DE one, that’s because it now thinks it’s in Germany, so starts looking for other available networks – critically it expects ones broadcasting the DE country code – although here in the UK it’s likely to find GB ones instead which can sometimes be connected to to but other times, frustratingly have connection problems.

Whilst I can’t say 100% for sure, it also seems very likely this is why when I try and add any new Ring branded wireless devices (and some other brands) to my own ASUS home network (broadcasting a DE country code) that they’re really painful to connect, regularly not finding my home network because their own setup country code and that of my phone is GB – so why would they even look for a network with a DE code as part of their setup?!

You can read about people experiencing similar problems with Ring here – I’d speculate the reason that this is “hit and miss” with some users experiencing it and others not is that because it’s an English language forum, so only people with Netgear routers in the UK broadcasting the DE country code experience the issue, not English speaking American ones.

The good news is that if you buy business-quality WiFi access points or routers, you’ll usually find the option to change the country code to whatever you want – but that’ll also normally be configured correctly as part of the setup for you.

Also that lots of routers that UK broadband providers offer as part of their home setup seem to use the correct country code.

However there are at least two brands of home WiFi, namely Netgear and ASUS (perhaps there are more!) who incorrectly configure their routers and access points in the UK to use the DE country code, and frustratingly, there’s no option (yet!) to change this.

Another very common problem relates to people with Apple Mac devices that connect to these rogue DE Netgear and ASUS routers.
Sure the Mac may connect to the WiFi and everything seems to work fine, but when you open up the “Wireless Diagnostics” app, and go through to the diagnostics report and you’ll see the following error relating to Conflicting Country Codes (please try it yourself and let me know in the comments!)

Then clicking in the info button shows a screen similar to this: 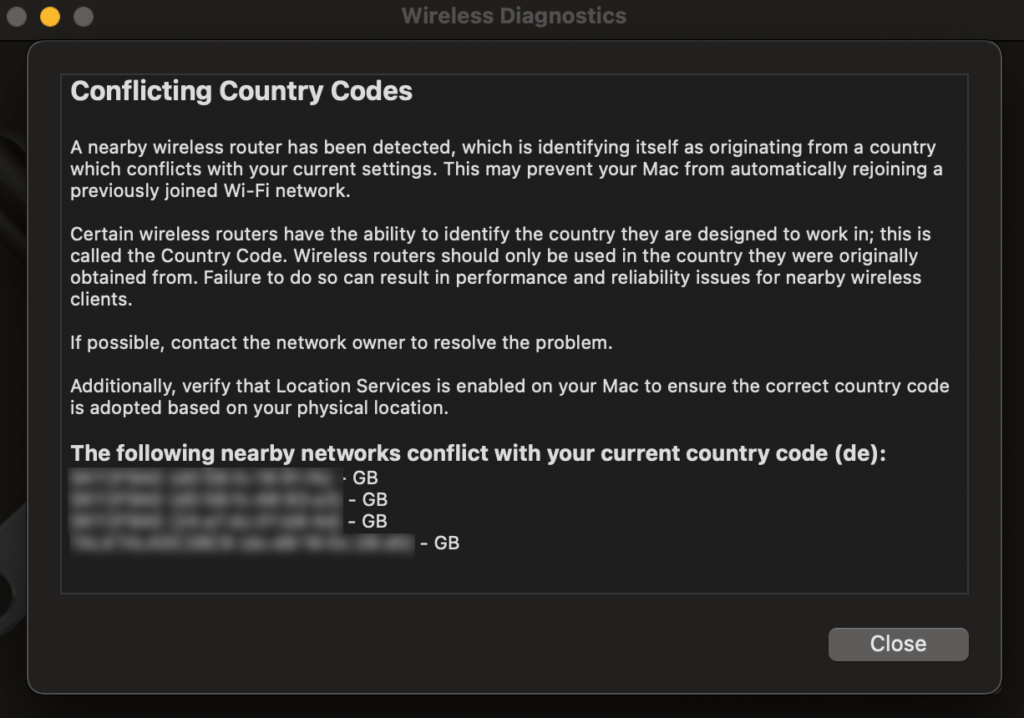 Some folks believe this problem is that their Mac has somehow been setup incorrectly, but my investigation suggests that it’s the incorrect country code that’s been broadcast by the wireless Access Point/Router that the Mac then inherits.

This is then compounded if a neighbouring WiFi network (eg a neighbour’s WiFi or your own Printer WiFi or smart TV network) is correctly broadcasting the GB country code – which leads to the conflict.

This is a bit of a “Batman” moment (remember the movie starring Michael Keaton and Jack Nicholson?) in that it turns out the issue isn’t caused by a single WiFi network, but rather a combination of one device incorrectly broadcasting DE, which your Mac adopts – whilst another, neighbouring device correctly broadcasts GB – which leads to a Mac reporting the conflicting country codes. 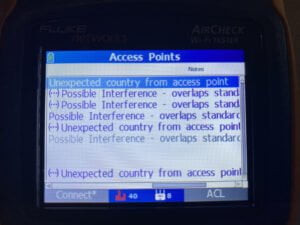 The problem appears to have been going on since at least 2015 and carries on today in that some of the offending routers are absolutely bang-up-to-date and possibly even top-of-the range flagship models costing hundreds of pounds – so it’s really not a great situation.

The reason it’s not well documented is that you have to have a Mac and then have reason and also the knowledge to open the “Wireless Diagnostics” app to even realise this exists, then you have to work through multiple steps before being told there’s a conflict.  The only other way to notice this is to buy a Wireless testing device like a Fluke AirCheck, which is really only something a geek working in IT networking like me would do!

I’ve reached out to ASUS tech support, but as of yet, not got a satisfactory response from them:

“We have checked and changing country code is not supported, and the DE or UK country code does not matter, as it uses same laws in limitation of wireless routers

If there is an issue, this would not be caused by country code”

I suppose the only positive thing here is that they have at least acknowledged they broadcast “DE” in the “UK”.  I’ve read various articles on WiFi country codes and regulatory domains and some folks even suggest it’s illegal to use the wrong country code – although I couldn’t find anything to back that up.

I’m also not too sure who the authority in the UK is to verify this – probably Ofcom, I’ve sent a request to them about it, awaiting a reply.

The thing is that, as Chris Hoffman wrote for How To Geek – there is an issue caused by the wrong country code

Fundamentally, the setting is wrong, but for the most part, the manufacturers say that DE would do fine and you can work around it or ignore the error messages, so it’s not going to be high on anyone’s priority list – particularly not as it only affects UK users of certain ASUS and Netgear devices that happen to have Macs and be struggling with WiFi and run Wireless Diagnostics.
(oh and of course any neighbours to people with these devices who have macs and notice incorrect country code neighbouring access points!)

I suspect this problem also exists with other Wireless devices that don’t have the tools to check like Mac’s Apple Diagnostics do.  Certainly I’ve also experienced issues with iPhones having WiFi issues with DE networks in the UK as well as Macs and Ring devices and this has gone away when using TP-Link business rather than ASUS or Netgear network devices.

This is one of those things where the WiFi hardware manufacturers say it’s not an issue and DE should do, but then Apple says it shouldn’t be DE in GB areas and it’s causing a conflict.
….but never the twain shall meet.

If you’re reading this article looking for solution today, then the good news is that there isn’t a problem with your Mac, but I’m afraid I’ve also got some bad news for you:

There isn’t currently a way to correctly set the country code on a Mac once it’s picked up an incorrect code from one of these rogue routers – if your router is broadcasting DE, you need a different router broadcasting the correct GB code.

If it turns out a neighbour has one of these problematic routers broadcasting the DE code that’s causing the conflict, you can let them know, but short of buying them a different router, there’s not a lot you can do about it!

An ideal solution would be for the routers to get firmware updates that allow manual selection of the correct country code – but that’d need somebody to do some additional development, that all comes at a cost!
….but maybe it’s the right thing to do – at least for current supported models!

Interestingly, this problem seems to have been around for at least six years, if not longer, and it really is just down to the router manufacturers cutting corners and not setting or allowing for configuration of the correct country code. 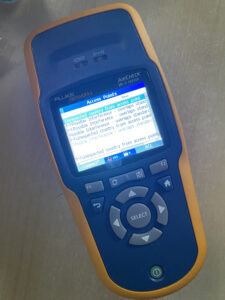 Using a Fluke AirCheck WiFi testing tool on my ASUS and Netgear home office networks, it also complains that the country code is incorrectly broadcast as DE, as do Apple Wireless Diagnostics, and really since there is a GB option in this country that other manufacturers manage to get right – then to me that makes a really strong case that it’s down to router manufacturers to resolve this, but first they need to at least agree it’s a problem!

As you can see from the links, there are all kinds of WiFi issues, and I’m not going to pretend this relates to every WiFi issue in the UK.  Whilst I can’t yet say for sure that these are all related, in my industry experience it does seem likely – I’d speculate that the common factor is rogue WiFi routers and access points broadcasting the DE country code instead of the GB one.

Hopefully if this blog post garners some attraction that’ll help the case for the manufacturers to pull their proverbial fingers out!

You have Successfully Subscribed!

We don't like spam either, so don't worry you can instantly unsubscribe if you don't want our monthly newsletter anymore